Disney hype is everywhere these days and I absolutely love it. I had about a week to chill after my last uni deadlines so I dedicated that week to watching Pixar films I’d never seen and rewatching firm favourites. I also intentionally waited until I’d seen Coco to write this post.

I went to see this film in the cinema and I was obsessed. It’s so clever and so different to other Pixar films. The creativity that went into this film is incredible. I know most Disney films portray an important message but this one really resonated with me. It definitely helped that the merch released along with the film was absolutely adorable. Sadness is my favourite character and I was excited to pick up her plush and funko. I regularly rewatch this and think it’s perfect whatever mood you’re in.

Okay so, I was late to the party with this one. One of my bestie’s favourite films is Finding Nemo so we were going to see this one together but she selfishly moved over 400 miles away. It didn’t feel right going to see this without her so I didn’t watch it until Summer 2017 and instantly questioned why I’d waited so long. It’s so funny and I love the focus on Dory. There are so many great characters, especially Hank and Destiny! It also pleases me that Marlin doesn’t feature so much in this film because I’m really not a fan. I admit, the truck seen at the end is a bit ridic but this Pixar film is so high up my list.

Obviously this had to feature. I don’t even have much to say about this film. If you know, you know. It’s super cute and just melts my heart.

Don’t get me wrong, I love Monsters Inc but I do prefer Monsters University. I think it’s an age thing. I was 17/18 when I saw this in the cinema and went with my friend. We laughed way harder than any of the kids in the cinema. I know these films are for kids (although there really isn’t an age limit) but I do think watching them when you’re older you have a different appreciation for them. I do miss Boo though because she is just too cute!

This was hugely anticipated and it did not disappoint. It’s my favourite of all the Toy Story films. I think we all shed a tear during that incinerator scene… right?! 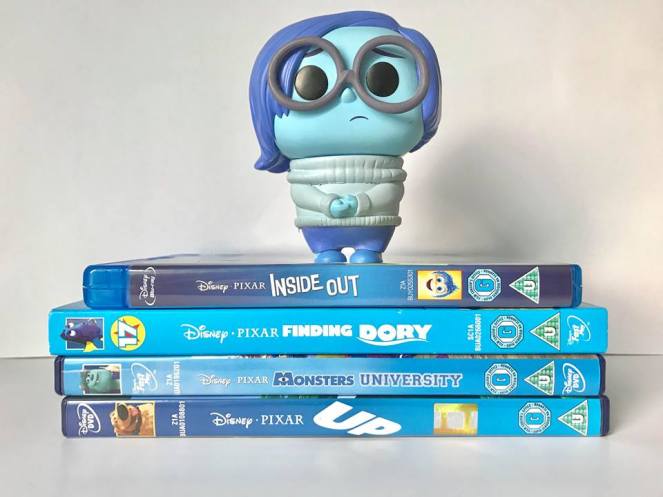 This list may be somewhat controversial. It also may have differed if I wrote it on a different day and while I’ve numbered them, that sometimes changes too within the five films. Everyone gets very protective over their Pixar favourites and I know Ian was baffled that The Incredibles hasn’t featured because it’s his number 1. Likewise, as a Scot I know some people will be surprised that Brave isn’t on the list, I do like Brave it’s just not what I hoped for when I saw the trailers!

Let me know your Pixar faves! Has yours featured?